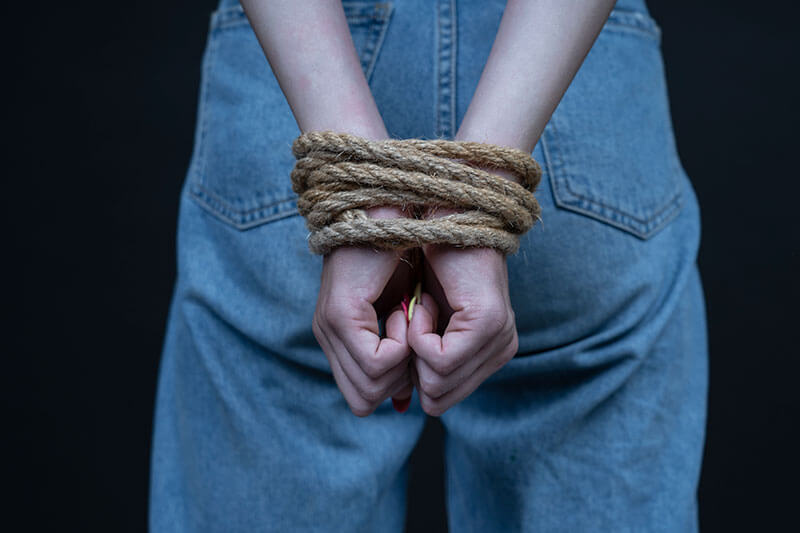 If you are a victim of trafficking, call our New Jersey immigration lawyers who are experts in this matter immediately. With more than 10 years of experience, Curbelo is a firm committed to the defense of human rights.

Human trafficking is a crime that exploits an individual with forced labor or commercial sex acts through force or coercion.

Migrant smuggling, on the other hand, occurs when an individual makes an agreement with a smuggler to illegally enter another country by moving across an international border.

Trafficking in persons is defined as the recruitment, transfer, transportation, harboring or reception of individuals through force, deceit or fraud, whose intention is labor exploitation for profit.

Men, women and children of any age can be victims of this crime.

This meaning is reflected in international law by the United Nations Protocol to Prevent, Suppress and Punish Trafficking in Persons, Especially Women and Children, also known as the Trafficking Protocol.

Individuals may be considered victims of trafficking regardless of whether they were transported into the situation of exploitation, were born into a state of servitude, participated in a crime as a direct result of being trafficked, or gave prior consent to work for a trafficker.

Illegal smuggling of immigrants is defined as the facilitation, for economic or other material purposes, of the irregular entry of a foreigner to a country in which they are non citizens and do not reside.

The criminals behind this network take advantage of the highly lucrative opportunity that exists from the need or desire of individuals to escape poverty, lack of employment, natural disasters, persecution and conflict in their country of origin.

Are you suffering from political persecution, is your nation having conflicts or do you consider that your life is in danger in your country of origin? You may be eligible to apply for political asylum in the United States.

Immigrants who are the subject of smuggling can be extremely vulnerable to human trafficking, abuse and other crimes, since they are in the country illegally. Typically, these individuals face large debts to their smugglers.

What Is The Difference Between Migrant Smuggling And Human Trafficking?

The Immigration and Customs Enforcement Service (ICE) has a report about the differences between human trafficking and migrant smuggling.

Did you come to the United States as a victim of human trafficking? We invite you to find out the T visa requirements, you may be eligible.

To visualize the difference between both concepts, we will show some simple examples.

In this case, Luis is a victim of trafficking, as fraud, coercion, and force were used to subject him to forced labor.

In this other case, Jesus was smuggled, there was no force, fraud or coercion. Therefore, the migrant was not a victim.

The Importance Of Differentiating Both Concepts

It is imperative that law enforcement, immigration officials, and civil society organizations are aware of the differences between human trafficking and migrant smuggling.

When trafficking is confused with migrant smuggling, victims of trafficking may not receive the legal protections or services to which they are entitled and may be vulnerable to further exploitation.

For more information regarding indicators of human trafficking, consult the list provided by the United Nations Office on Drugs and Crime (ONODC).

From time to time, immigration law intersects with criminal law. Visit our article on “Crimmigration” for more information on this.

What Are The Similarities Between Human Trafficking And Migrant Smuggling?

Although there are certain differences between both terms, they also have points in common. Among these similarities we find the following:

UNODC has pointed out that human trafficking is a crime that consists of 3 main elements:

Traffickers typically control their victims using physical or sexual abuse, blackmail, emotional manipulation, and the withdrawal of official documents. This exploitation can occur both in the victim’s country of origin, during migration or in the destination country.

On the other hand, migrant smuggling is a crime with high profits and low risk of punishment for criminals. These are often part of international organized crime networks. However, many migrants are at high risk of dying, as they can dehydrate in deserts, suffocate in shipping containers or drown in the sea.

What Are The Causes Of Human Trafficking?

The causes of trafficking are diverse and sometimes complex, which means that it is not possible to enumerate and explain them concretely. However, it is usually due to:

You can get more information in the UNODC publication on this topic.

Curbelo Law is a law firm that passionately defends the fulfillment of human rights. On our website you can learn what a U visa is or learn all about the VAWA visa in a series of blogs that deal with immigration reliefs that can protect your rights.

What Are The Reasons For The Increase In Human Trafficking And Migrant Smuggling?

The reasons for the increase in human trafficking and migrant smuggling are driven or influenced by economic, social, cultural factors, lack of education and job opportunity in the country of origin.

This increase has prompted authorities to crack down on organized crime groups that facilitate migrants to travel across the border for exploitation and/or profit.

As of the time of publication of the article, INTERPOL-led Operation Storm Makers recently made 121 arrests in an anti-trafficking and migrant-smuggling operation .

In total, the authorities rescued 80 victims of human trafficking and identified some 3,400 irregular migrants, the product of migrant smuggling. This entire operation took place from March 21 to 25, 2022.

Who Are The Victims Of Human Trafficking?

Victims of human trafficking can be of any gender, age, or ethnicity. According to a 2020 global report on trafficking by UNODC, female victims are the main targets of this crime.

Girls are mainly trafficked for sexual exploitation, while boys are used for forced labour. The proportion of male victims increased to around 10% in 2003 and to 20% in 2018.

Who Are The Traffickers?

According to the 2020 Global Report on Human Trafficking published by UNODC, it shows that two-thirds of individuals convicted of trafficking crimes were men, but the participation of women was higher compared to other crimes.

While many traffickers have criminal records and use trafficking as a direct source of income, there are also business owners, close associates, and other family members involved in human trafficking.

Certain court cases reveal scenarios where parents themselves facilitate the sexual exploitation of their children.

What If A Victim Is Aware Of Human Trafficking?

The UN protocol against human trafficking states that when threat, use of force, coercion, abuse of power, position of vulnerability or deception is used, the victim’s consent to exploitation is Irrelevant. In the case of children, it is irrelevant whether or not any of these means were used.

Did you come to the United States as an undocumented child? You may be eligible for DACA. You will find information on this topic in our article on “DACA application requirements“.

What Types Of Industries Are Affected By Human Trafficking?

No economic sector or industry is immune from human trafficking. However, there are fields with a higher frequency of victims of trafficking, such as agriculture, construction, restaurants, domestic work, entertainment and the sex industry.

Are Many Traffickers Caught And Convicted?

Yes, most countries have comprehensive legislation on human trafficking for several years. In addition, the number of convictions has grown recently. However, the airways continue to have low numbers of convictions for trafficking and at the same time, lower detection of victims.

What Is The Role Of Transnational Organized Crime Groups In Human Trafficking?

Trafficking criminals are often organized criminal groups or individuals operating on their own or in small groups. The groups with a greater organization are usually involved in other serious crimes, such as arms or drug trafficking.

Why Does Human Trafficking Exist?

Generally, traffickers target individuals who are marginalized or in difficult circumstances. Undocumented immigrants and those desperately in need of employment are the most vulnerable to this crime. Victims may be tricked or forced into an exploitative situation.

Curbelo Law, A Firm Committed To The Fulfillment Of Human Rights

The Curbelo Law firm, headed by attorney Carolina T. Curbelo, has been defending immigrants for many years in terrible scenarios like the ones mentioned in our article.

Hopefully, now both concepts will be much clear for you so if you have been involved in a case involving human trafficking or migrant smuggling, do not hesitate to contact our professionals in the immigration practice area.

The Curbelo Law team specialized in violence and immigration with a focus on human rights is at your disposal to inform you of the possibilities and resources available to those involved in these delicate matters.

The firm is headquartered in Ridgewood, New Jersey, United States. From here we have helped clients globally in multiple immigration matters.

How to get a Green Card

EXCELLENT Based on 22 reviews