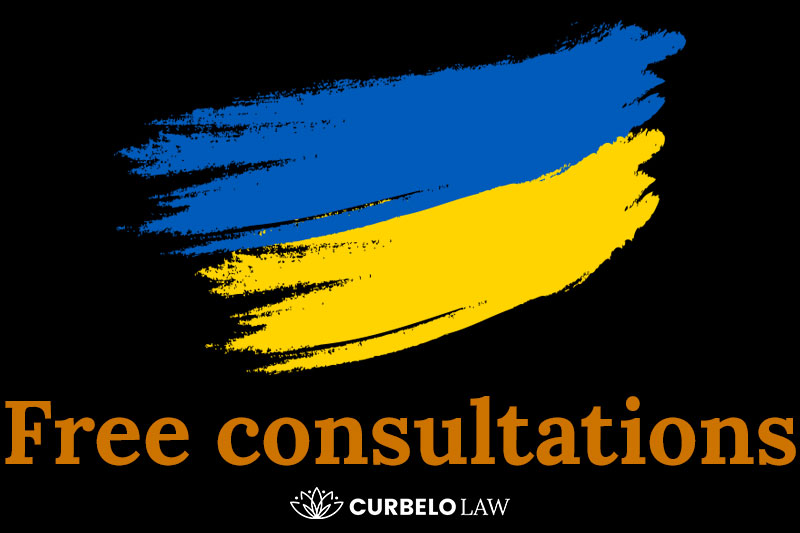 The devastating Ukrainian conflict has unleashed great hardship on Ukrainians. What began as political threats has now turned into a war that seems to have no end.

Recent military moves raise the specter of World War II, where one country invaded another with military might and no regard for civilians. Although years ago, there were already tensions between the two neighboring countries, on February 24, 2022 those materialized in the worst possible way.

This is one of the darkest scenarios that Europe is facing today.

Faced with this emergency situation, the Curbelo Law firm wants to contribute by offering free consultations to Ukrainian nationals.

Curbelo Law is an American firm with a strong online presence and with offices located in Ridgewood, New Jersey. Attorney Carolina T. Curbelo and her team of immigration law professionals fight daily for the defense of human rights.

As an immigration and asylum expert for over 10 years, Carolina is highly qualified to offer this assistance to Ukrainian nationals who need legal advice on immigration, visas or asylum in the US.

resources to contribute and additional information for refugees

The Department of Homeland Security (DHS) has announced Ukraine’s designation for Temporary Protected Status (TPS) for 18 months. You can read the latest news here.

Below is a list of links for those who want to contribute in this terrible conflict that is affecting thousands of innocent people.

The Origin Of the Modern Conflict

We must go back to 1991, when the dissolution of the Soviet Union took place and its territories became independent republics. From then on, Russia was under the mandate of Boris Yeltsin until 1999, when the current president Vladimir Putin succeeded him and reformed the Russian constitution to remain in power for more than two terms.

Ukraine’s president at the time, Viktor Yanukovych, became one of Putin’s closest allies, staying with him for two consecutive terms.

In 2013, Yanukovych suspended the signing of an association agreement with the European Union at the request of Russia. This caused the discontent of the Ukrainians and generates a series of protests against the decision.

A couple of months later, Ukrainian security forces killed at least 100 protesters. This causes the repression against Yanukovych to force him to flee to Russia. After this, Ukraine issued a search and arrest warrant against him for high treason, while Putin was preparing for war.

The significant Takeover Of Donbas

A month after Yanukovych lost his power in Ukraine, Putin ordered the takeover of the Donbas peninsula, where the Donetsk and Lugansk regions are located. The government of Crimea, Donbas region, signed independence with Putin, but as a result of this, it caused the outbreak of a war in that area.

The conflict caused a large number of casualties, including all the occupants of a Malaysia Airlines commercial flight, which was hit by a missile.

One of the keys to the conflict between Russia and Ukraine is precisely the Donbas area, where the civil war between Ukrainians and pro-Russians has continued from 2014 to this day.

In May 2019, Volodímir Zelensky took power as the Ukrainian president and together with Putin, they agreed in Paris to resume the peace process. However, no concrete agreement was reached.

Following this, Russia moved troops to its borders with Ukraine and to the Crimean peninsula. Although 46 nations and organizations (including NATO) demanded that Russia return the Ukrainian peninsula, such a request was not possible.

Why Does NATO Not Accept Ukraine As A Member?

Despite the fact that Ukraine is not a member of NATO, it has belonged to the group of countries that collaborate within the Partnership for Peace program directed by this organization, for which the Atlantic Alliance has shown its support for Ukraine in the face of Russian conflicts .

In 2020, President Zelensky approved a National Security Strategy with the aim of officially joining NATO, which would imply a direct loss of Russian influence over the country.

Although the organization had not welcomed Ukraine as a member for various reasons, Russia, disagreeing with Ukraine’s desire to join the Atlantic Alliance, sent troops to Belarus for joint maneuvers near the Ukrainian borders.

On February 3, 2022, NATO and the United States refuse to sign a bilateral treaty on European security with Russia, closing the door to a future incorporation of Ukraine into NATO.

Finally, on the early morning of February 24, an announcement was made by Russia about a “special military operation in Donbas”, which surprised the Ukrainian civilians with loud explosions in various points in the east of the country. Russia began its attack on Ukraine.

The outcome of this war is uncertain, what we do know is that the most affected have been Ukrainian civilians, who have had to suffer a catastrophic scenario.

Russian troops in Kiev, the Ukrainian capital, launched an offensive against civilian infrastructure, causing more than 100 deaths and leaving a population displaced from their homes.

It is estimated that more than 100,000 Ukrainians have fled the capital with an unclear political picture, if this doesn’t stop it could lead to the start of a much bigger war.

If you are a Ukrainian national and need any legal procedures or assistance due to the dramatic situation your country is facing, do not hesitate to contact us.

Afghans In The US Can Now Apply For TPS