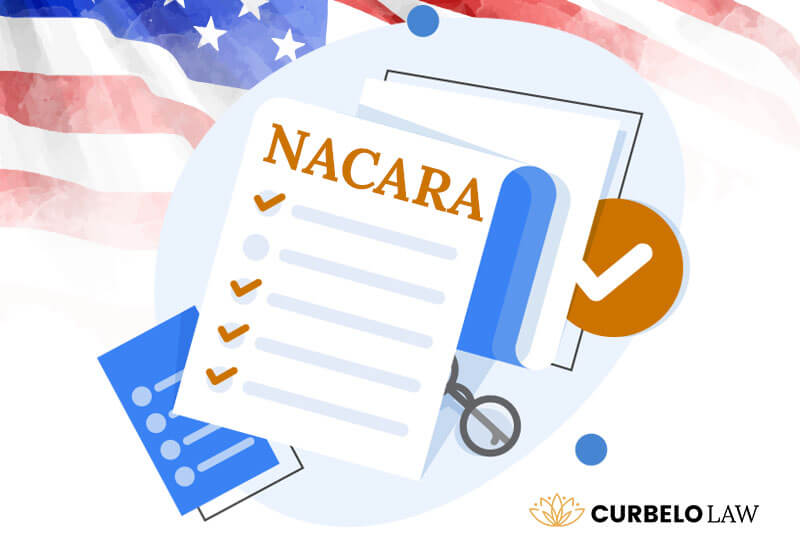 If an alien is granted cancellation of removal under the NACARA program, they will obtain lawful permanent resident status in the United States.

If you think you qualify for NACARA and require expert legal advice, our New Jersey immigration lawyers can help. Call us today so we can discuss your immigration status.

The Nicaraguan Adjustment and Central American Relief Act or NACARA is one of several US programs available to certain national foreigners in the US. Under this program, the following should be considered:

What Is The NACARA Program?

The NACARA program is a US law targeting citizens of El Salvador, Guatemala, and other former Soviet bloc countries under certain criteria. When the NACARA aid is granted, the beneficiary can obtain the Green Card in the USA.

The program allows you to suspend deportation or apply for cancellation of removal, even if the alien is not in one.

A similar program, although not a direct path to residency, is DACA. If you entered the US illegally as a child and meet DACA application requirements, you may be able to avoid being temporarily deported from the US.

Section 203 of NACARA allows aliens who qualify for the program to apply for cancellation of removal and avoid removal from the United States.

Which President signed into law the NACARA Law?

The NACARA Act was approved on November 13, 1997, was signed by the president of that time, Bill Clinton on the 19th of that same month and entered into force on June 22, 1998.

How Do I Qualify For The NACARA Program?

To apply for NACARA, the applicant must meet one of the following criteria:

Individuals From The Former Soviet Bloc:

To qualify for this relief, the applicant:

If you are a victim of cruelty or other abuse in the US, you are not alone and the law protects you. Find out what is a U visa and what is the VAWA visa in our blog.

Evidence For The NACARA Program

Once a foreign national is eligible to apply for NACARA with USCIS, they must demonstrate the following:

The law requires that the applicant be physically present in the United States for a continuous period of at least 7 years prior to the date of application. Additionally, they had to maintain good moral character during that time.

Can an undocumented alien get married in the United States? It is a common question among those who have stayed in the US for a long time. On our website you have the answer in a detailed blog.

What Is The ABC Settlement Agreement?

In 1985, a select group of organizations (including American Baptist churches) filed a lawsuit against the US government.

What Are The Benefits Of The ABC Settlement?

Among the benefits obtained by the ABC Settlement Agreement we find the following:

There are certain exceptions to these restrictions. For example, in the event that an individual flees, USCIS may require them to report to their offices twice a year.

While in the US, were you or a loved one detained by immigration? You may be able to post a bond. We invite you to read our article on where to pay an immigration bond to learn about this topic.

Who Can Be Members Of The ABC Class?

Members of the ABC class are defined by their nationality and date of entry into the U.S. In addition:

To apply for NACARA, the alien must file with USCIS Form I-881, Application for Suspension of Deportation or Special Rule Cancellation of Removal.

What Happens After I Apply?

You can learn more about asylum offices and the ASC locator on the USCIS website.

How To Prepare For The NACARA Program Interview?

Here are some tips on how to prepare for the interview for this program:

If the NACARA applicant has a valid passport and USCIS approves their application, temporary evidence of permanent resident status will be stamped on the passport.

What To Do If I Cannot Attend The NACARA Interview?

If you are unable to appear for your NACARA interview, you must contact the asylum office prior to your interview date. It is possible to reschedule the interview once and without reasonable excuse.

This is possible when USCIS receives the petition at least two days before the scheduled interview date. A written request can be submitted to the asylum office via fax, mail, or by hand delivery of a written request.

Please note that it is not possible to reschedule an appointment over the phone.

What Can I Do If I Changed My Address?

If you change your address, you must:

Additionally, you can also:

What Happens During The Interview For NACARA?

How Can We Help You With The NACARA Program?

At the law firm of Curbelo Law, we stand in solidarity with all those national foreigners who have suffered wars, famines or any other hardship. Our team is ready to apply our vast experience to obtain NACARA, as long as you are eligible.

Our attorney Carolina can help you make sure everything is done correctly, whether for this program or any other.

For more information, feel free to contact us by phone, email, or by scheduling an appointment at our office in Ridgewood, New Jersey.

What is consular processing

EXCELLENT Based on 22 reviews